Join us for a special evening on November 5th 2014 at 7pm with four acclaimed documentary editors. Using scenes from their films, these edtiors will discuss instances of using raw footage in unexpected ways. Ways that were not intended - but had a hugly satisfying outcome for the audience. Location is the Sir Sanford Fleming Building Room SF 1105 at the University of Toronto, check our Facebook page for more details on how to register.

Avid Toronto Editors' listen up! It's time to celebrate post professionals in home territory, The AOTG world pub tour has a Toronto date and the ATE is proud to support a night of drinks, giveaways as editors collaborate for a fun social event.

Join Gordon and the AOTG team on July 21st 2014 at the Pacific Junction Hotel at 7pm. It's gonna be a fun night with amazing giveaways including Assimulate Scratch worth $21,000!

CHANGING OF THE GUARD

ATE GENERAL MEETING - The Art of Post in Hollywood

TORONTO, ON – February 21, 2013 –The Avid Toronto Editors (ATE) were proud to host our keynote speaker, Oscar nominated Picture Editor Daniel Rezende to a sold out crowd.

Moderated by ATE and Art of the Guillotine's Gordon Burkell, they discussed his career, past projects and his role as lead editor of the new Robocop feature film. His filmography includes: City of God, The Tree of Life, Elite Squad: The Enemy Within, Motorcycle Diaries, 360, and Blindness. Prior to the keynote speaker, we hosted three presentations from our sponsor’s Avid, Blackmagic Design, and Pivotal Post.

Proceeding our guest speakers, the ATE hosted a draw for an assortment of prizes including signed Blu-ray copies of Daniel Rezende's films, Grand Prizes, plus Avid SWAG.

*** The grand prizes include Avid Media Composer 6.5 and Blackmagic Design's DaVinci Resolve 9 (Combined total value of over $3,500 USD). *** Congratulations to our Winners!

Thank you to all that attended. See you at our next event in the new year!

The event was sponsored by: 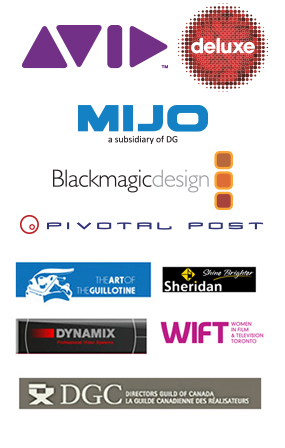